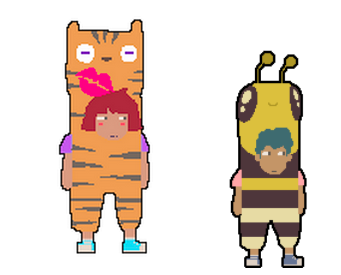 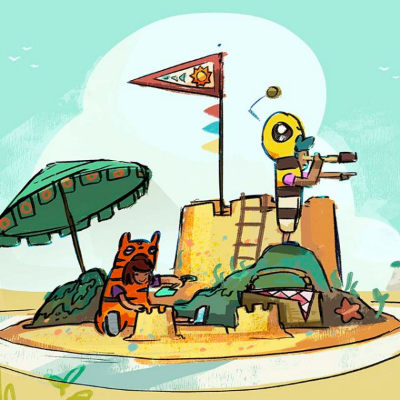 Here are some insights into the making of Kissy Kissy!

Kissy Kissy! is a game for children of all ages to play together.

Kissy Kissy! was always designed to be a non-violent game about co-operation even before it became a game aimed at young and old playing together. I wanted to build a game that I would be happy to play with my own grandchildren, that was not about being the best, beating others, focusing on individual high scores. I liked the idea that in every level the two players work together to to build their den and I of course assumed that this is what people would do - help each other. Then I watched the grandchildren play the game, which was a great piece of playtesting. They soon discovered that they could take objects off the other player and run away, so there was a lot of swopping back and forth; cue much hilarity. Another important element of the gameplay involves rescuing each other if you have been kissed by grandparents. Once kissed, your character throws a tantrum and you have to wait for the other player to come and rescue you. Three kisses on either of you and the level has to start again. So, that seemed straightforward enough. I watched the grandchildren wind each other up by NOT rescuing when they had been kissed by the grandparents. It was too easy for the still-roaming twin to run around and collect things, leaving their sibling stuck and frustrated. So that is why when you play Kissy Kissy! there are objects in every level that players have to drag together into place to build their den, and perhaps more importantly, both players have to be in the den at the end of the level to pass to the next. This encourages players to properly co-operate and to look out for each other - let no one be left behind!

When Kissy Kissy! was born at Fuse Jam it was not originally designed to be a game FOR children, it was originally about BEING a child. Then when I started pitching the idea I got lots of advice from games industry people to aim Kissy Kissy! at 4-7 year olds as it wasn't quite cool enough for children the same age as my grandchildren who had inspired it, even though they thought it was really funny. With that younger target audience in mind - and their grandparents - I wanted to keep it simple, so that all ages and levels of dexterity could play. Keeping it simple meant:

Keeping controls simple for all ages is important. Most games for small children seem to be touchscreen games for mobiles, tablets and ipads. Our game runs on pc/mac and in the first version used classic keyboard button configurations (WASD & arrows etc). To make the game really easy to play we decided that game controllers were the next logical step - less crowding over the keyboard too! So now you can play Kissy Kissy! with any game controller plugged in via USB. 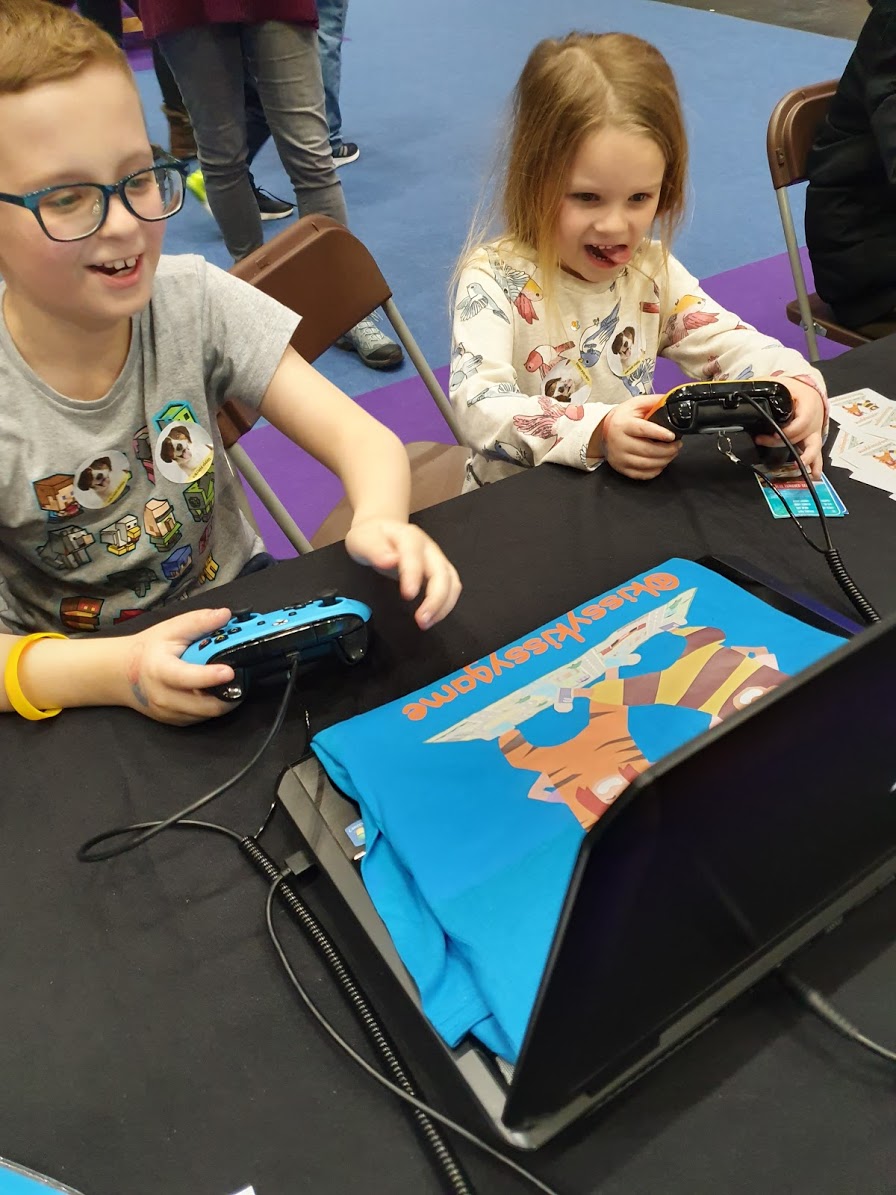 When using controllers, each player only needs to one joystick and one button. People using specially adapted controllers should also be able to plug in and play. Anyone who already has a Nintendo Switch will know that each end has a joystick and button - perfect for playing Kissy Kissy! as a two-player couch co-op and another reason for us wanting to get the game onto that platform! Limiting the controls to two buttons has worked really well for small children, as well as adults who haven't touched a controller before. Another important element of making the game easy to play is implementing the Unkissable mode.

You have probably worked out by now that in each level gameplay involves running away from grandparents intent on kissing you. If either player gets caught three times then it's game over and you have to restart the level. After some playtesting involving siblings with a bit of an age gap, we implemented Unkissable mode - this means that either or both Tiger & Bee can be made unkissable, but eveything else carries on the same, working together, building dens, etc. It makes the game last longer when you are playing with three year olds or anyone else who has never used a gamecontroller. 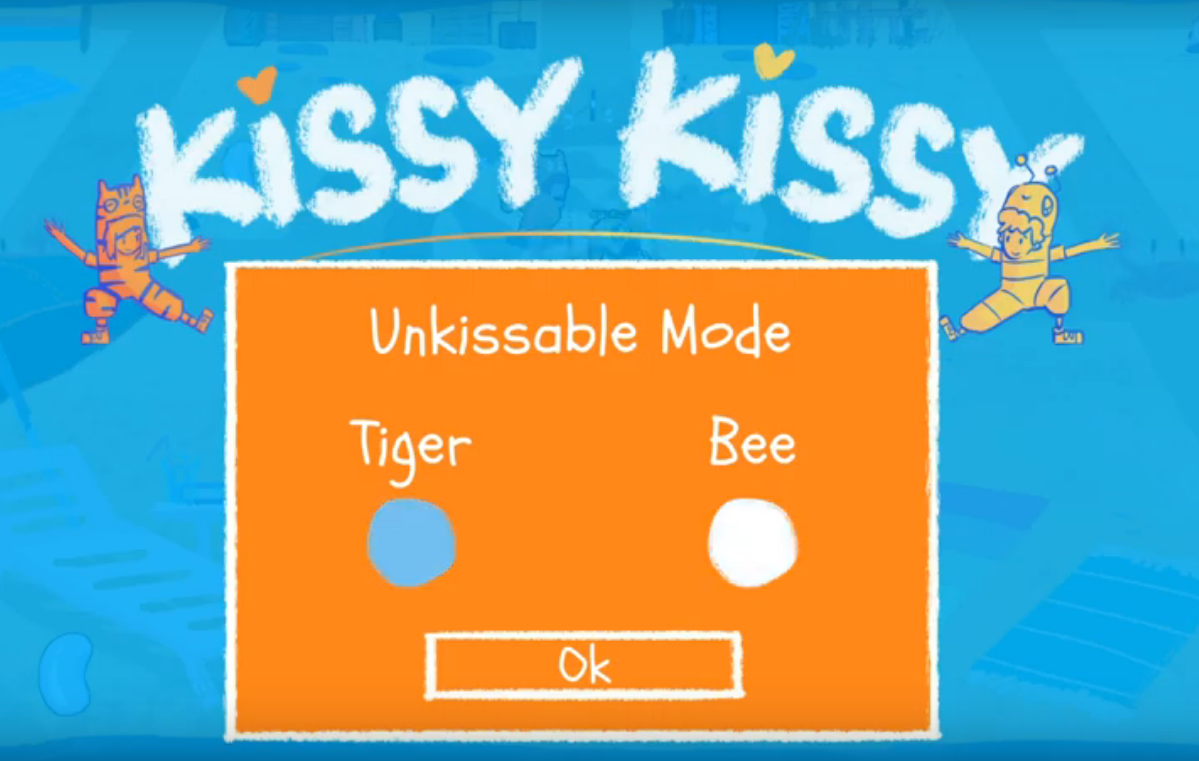 Making yourself Unkissable has proved popular. It seems to be a really useful feature for enabling all ages and abilities to play co-operatively together, regardless of expertise or dexterity. We are still exploring how to create fun intergenerational games, and this seems like a good first step. 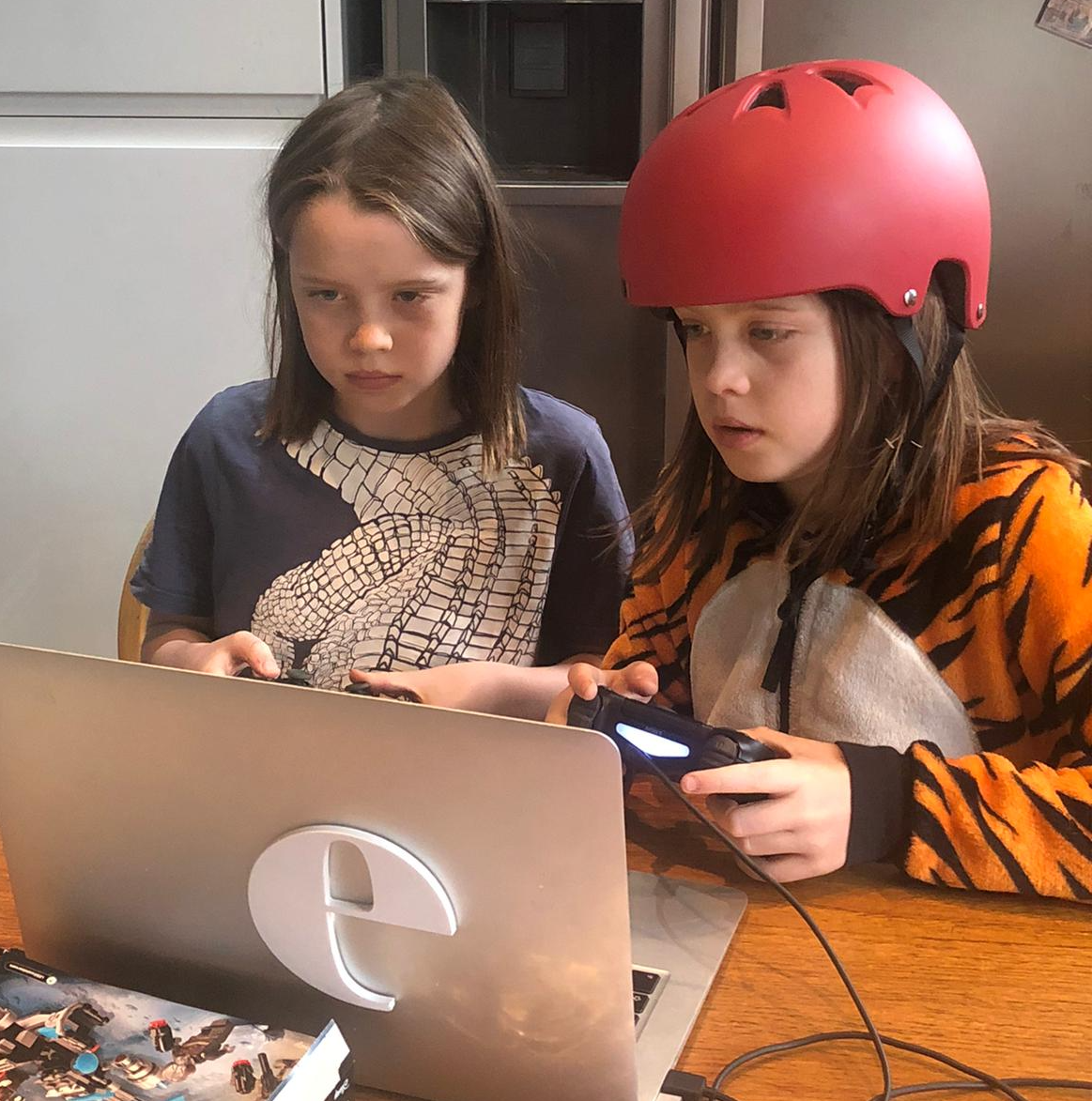 The cute and colourful characters in Kissy Kissy! are called Tiger & Bee. They are inspired by my onesie-wearing grandchildren who have been wearing tiger outfits since they were toddlers, and still do, though these days they are just as likely to be dressed as spiderman or a wookie. In the original version of Kissy Kissy! at Fuse Jam we had Tiger & Bear, as two tigers running around collecting cushions would make it hard for players to know which one they were controlling. 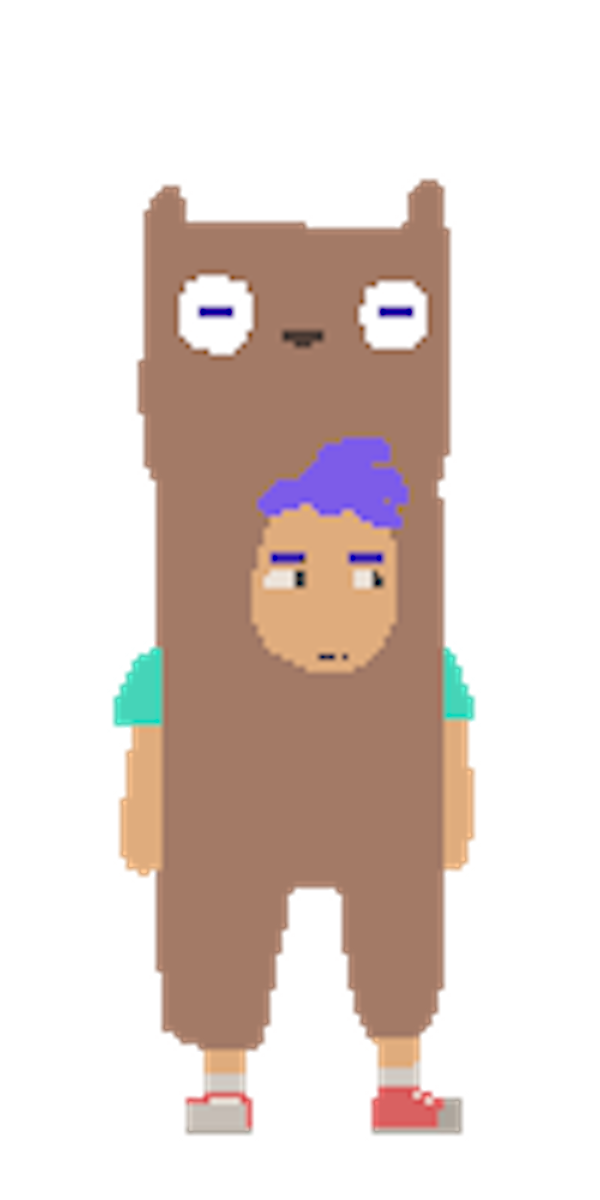 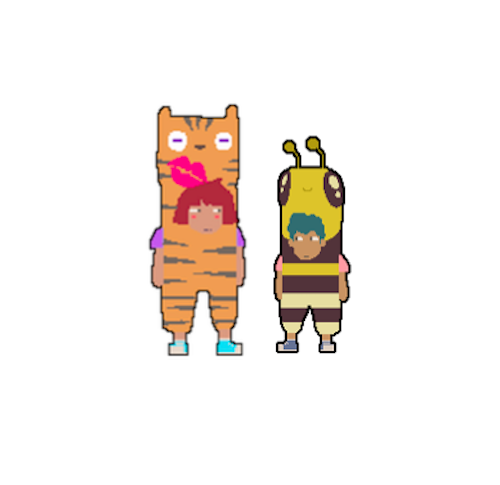 In the current game Bear has become Bee,  equally as colourful as Tiger and clearer to see against the background. It was also  important to me that  Tiger & Bee are gender-neutral characters, inhabiting that space for small children where clothes are just something that keep mud off their skin and they can spend the whole day being a puppy if they want. Or a tiger. During play-testing not one child asked if they were girls or boys, they just played the game. I hope that the characters appeal to everyone. We are experimenting with ways to change hair and skin colour, and in the future want players to be able to purchase new outfits with the jelly beans they collect in the games.

The other main characters in the game are of course the two Grandparents, who are designed to look as though they have been drawn from a small child's viewpoint, consisting of a large head with hands and legs sticking out. There were originally lots of Grandparents popping up all over the place and moving inexorably towards Tiger & Bee. It got a little bit too confusing and potentially too difficult for slower players so we cut right back to two Grandparents coming for you, and gave players a few things to throw to slow them down - bananas and toy brick to leave for them to trip on. The Grandparents are also gender-neutral and we are working on ways to customise them by changing the colours and outfits. I noticed recently when the littlest grandchildren played Kissy Kissy! that they were shouting "Watch out for the Kissy Kissies!" and so when we next edit the game that is what we will call the grandparents - the Kissy Kissies. 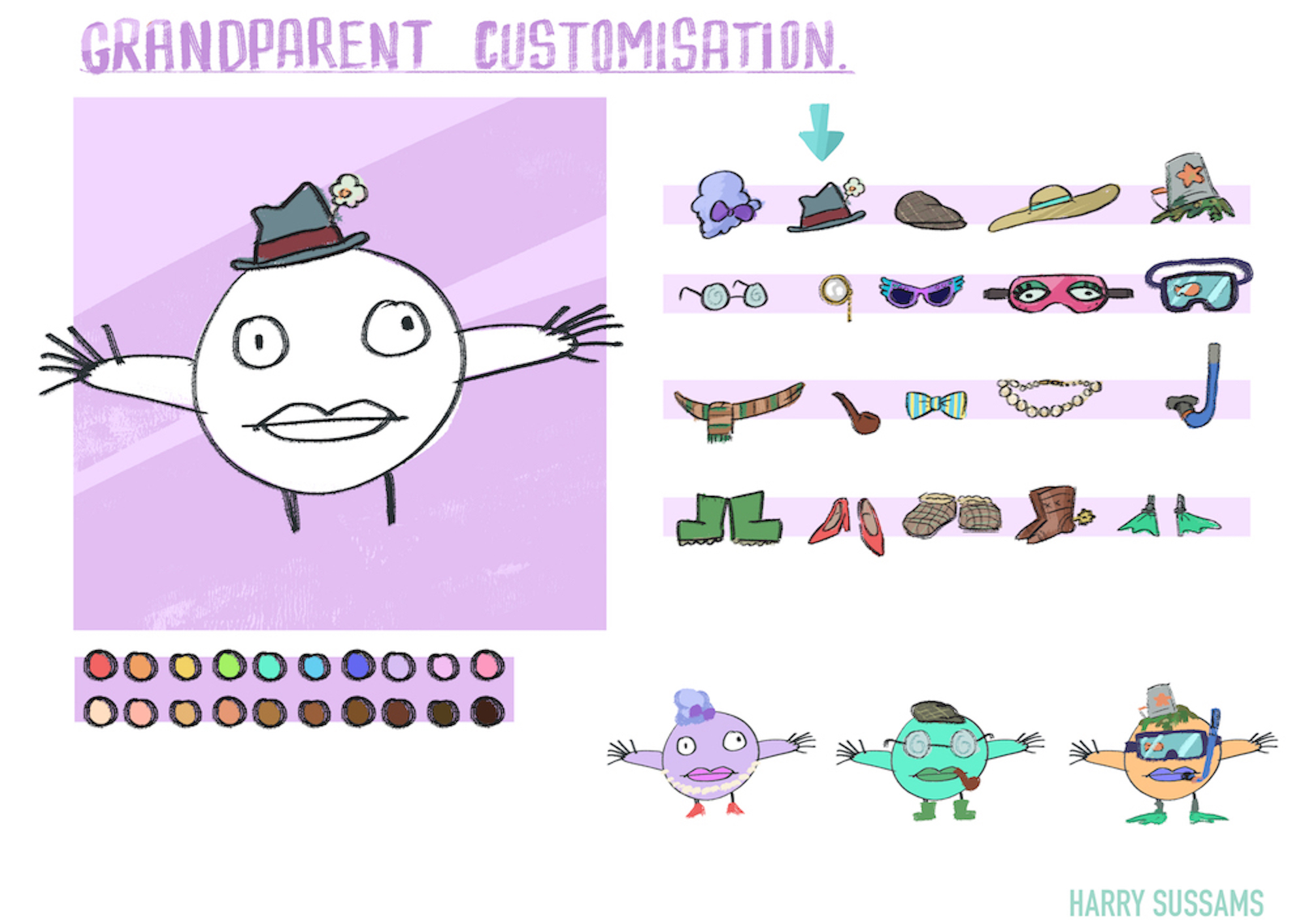